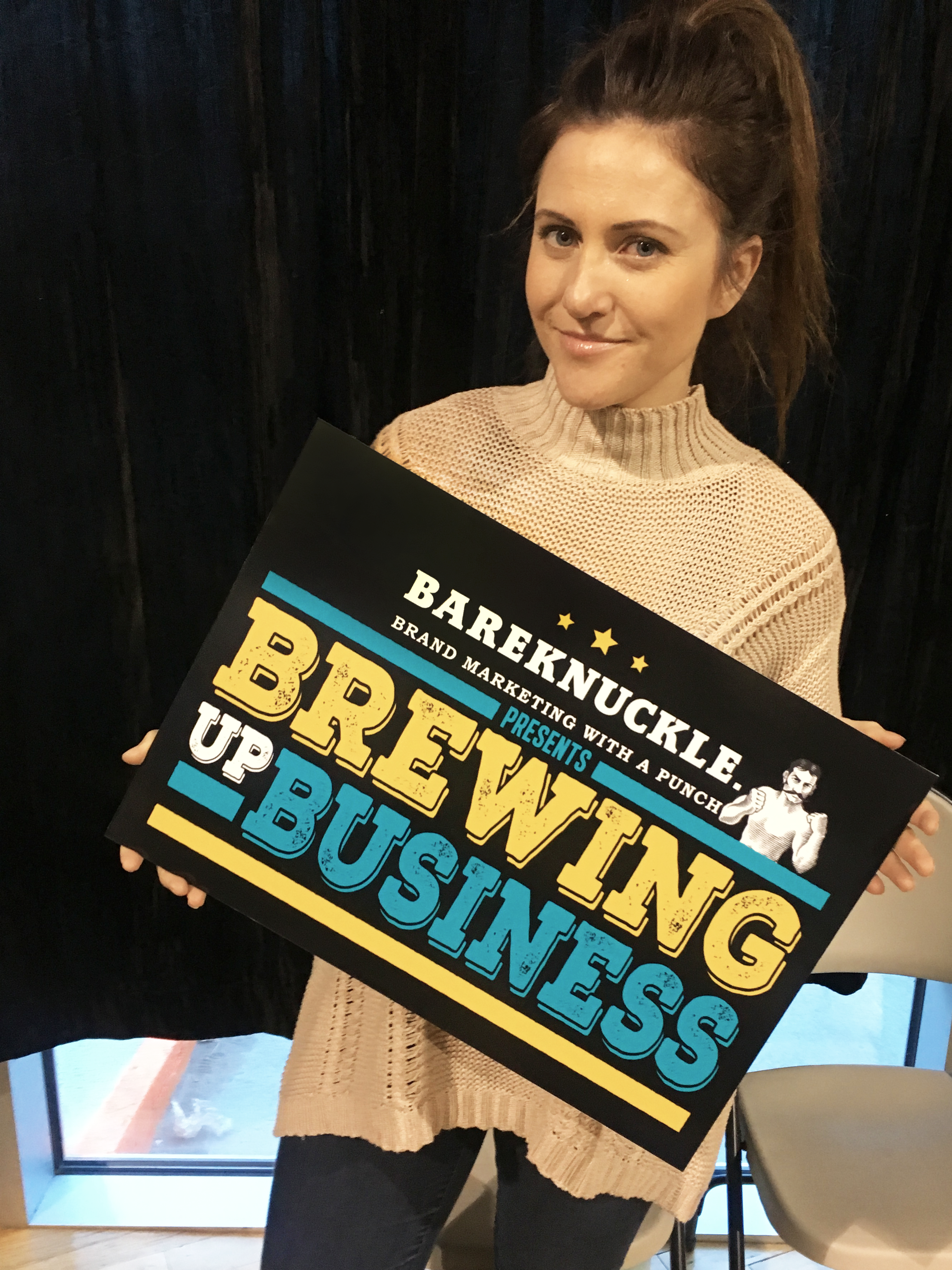 Drinking beer, meeting people and learning more about local businesses, what more could you want from a panelling event? Ali was one of three local businesses owners asked to come and discuss what they have learned from their success and failures throughout their journey as business owners in Reno.
Brewing Up Business started as a small group of locals brought together weekly by their drive to discuss business and of course, enjoy good beer. They have now started to expand their club and have begun hosting Quarterly Events. With the help of Bareknuckle Brand Marketing they debuted their first event titled “Drink and Learn Stuff” (we were in just hearing the title). The topic was “The Sticky, Sloppy Game of Self Promotion: Tips and Tricks from a Panel of Folks Who Got it Right (and Sometimes Got It Wrong)”. Again this was a topic Ali has become an expert on through her seven years developing Strange into an established brand. Courtney Baker from Gold Fever Glass and Cody Whitt from Full Circle Soils & Compost
were invited as well to round out the event. 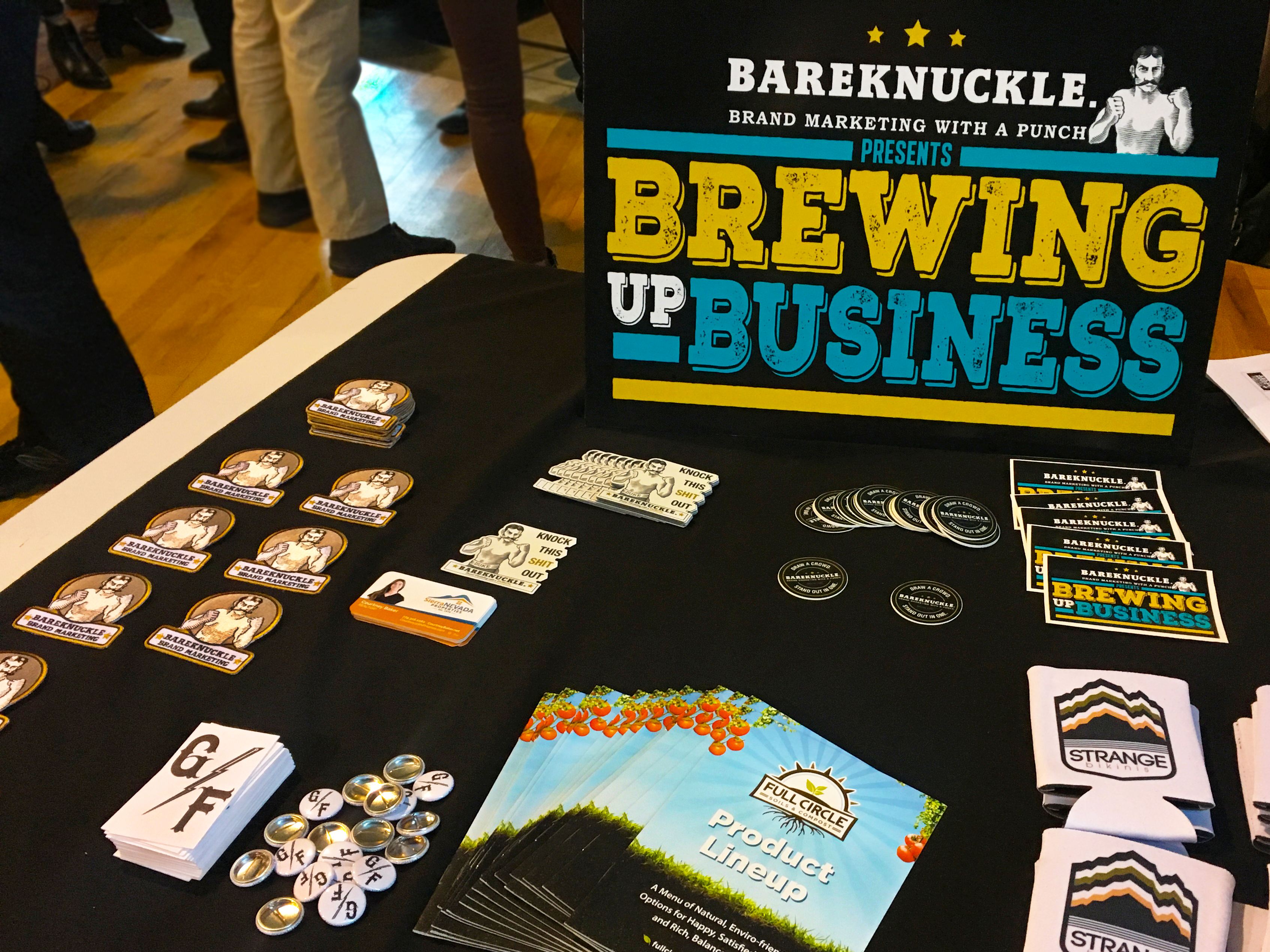 After everyone had wandered in, grabbed a drink and picked up some free merchandise Bill West from Bareknuckle directed everyone to the stage and began to lead the panelist in discussion. The first question posed was “When have you marketed to the right or to the wrong audience?” Whitt from Full Circle told a story of his failed sales attempts and emphasized the importance for a company to know their specific audience. Baker from Gold Fever talked about her struggle to move away from making anything for anyone to making what she wants and trusting it will sell. When it came to Ali she discussed a similar transition from just making any type of bikini to fully becoming the creator. “Its so fun when you get to be the creator, and you get that freedom. I was making certain things that just weren’t me. They were definitely strange, just not in the right way. In 2015 when I sat down to write my business plan, I funneled it down to what I wanted. As soon as I made that transition in my thought process everything became more clear on social media for sure. My Instagram began to look amazing, and it was because I was putting out what I wanted, and I had a clear direction.”
Bill then moved into the next set topic, what outlets the companies have used and if those had worked for them. Whitt and Baker had similar stories of the trials and errors of selling on social media and finding their niche online. Ali first emphasized on the importance of having “swag” to give out to get your companies name and logo out there, “it sounds silly but then you see homeboy on the lake with a Strange Bikinis koozie.” In addition to swag, the ambassador program has always been a key aspect of the companies promotion. Ali’s last advice on getting your companies name out there, is to physically get out there! “I do a lot of public speaking. Get out there and tell people about your products because people want to know!” 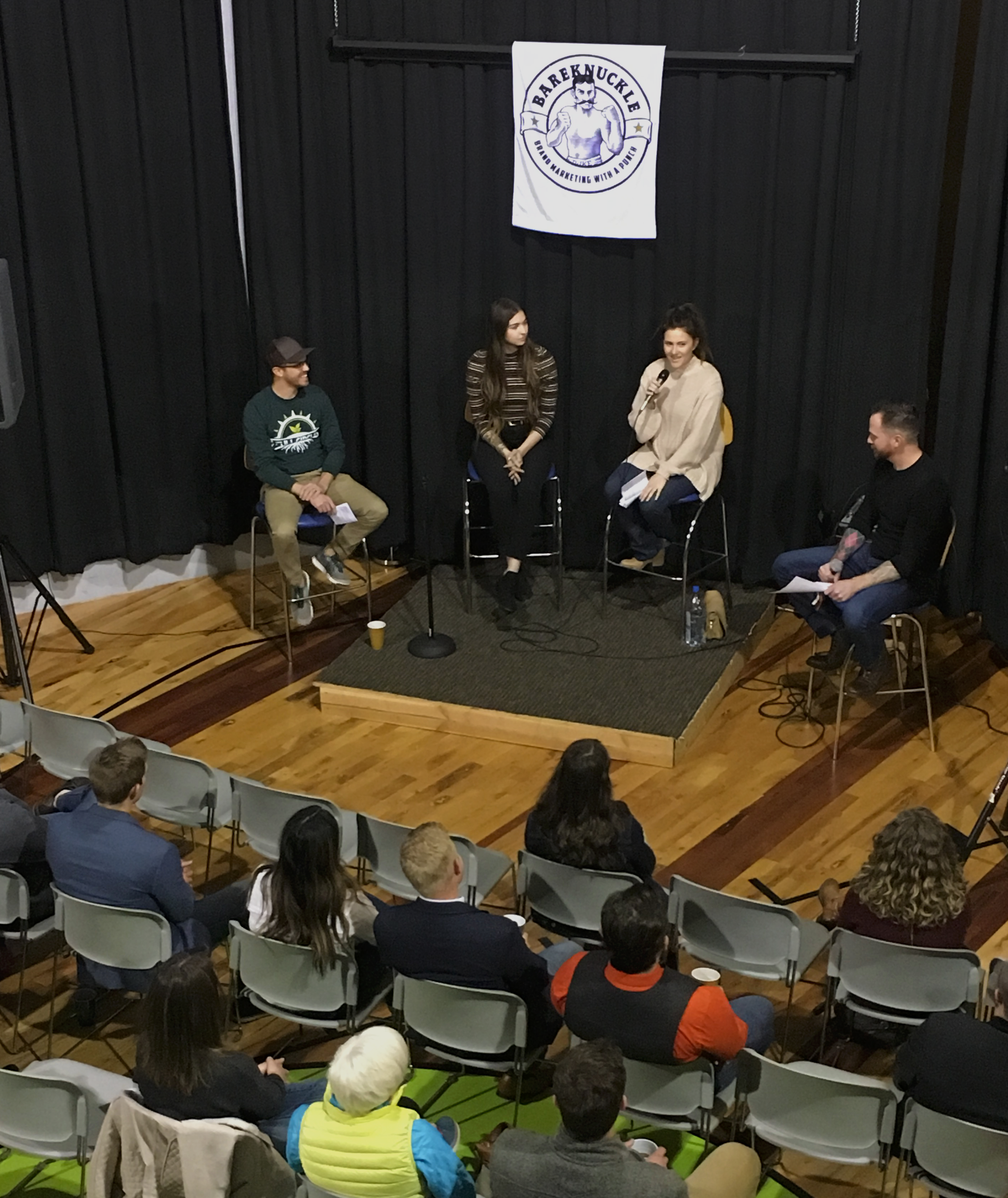 Next up was a issue businesses, personal branders, and almost anyone who has tried to deliver a message can relate to: how do you hon in on the right message? Again Whitt and Baker shared similar ideas. They both found the most success in their messages when they stayed with a professional tone but at the same time personable. Remembering to get their set messages across, but learning to do it in a way that people can still relate and feel connected to. Who knew a compost and stain glass company would find common ground? For Strange Bikinis Ali has found the most success when she is focusing on her Strangers. Not on just the fabric and stitching that makes up a swimsuit, but about how the person feels in that swimsuit. “It’s not about me, I like to keep it about what I like the most and that’s actually not even the swimsuit, it’s about how the person feels in my swimsuits.” Her focus is too keep it genuine and to make sure all her Strangers feel sexy and confident at the lake, pool, beach, or wherever they decide to rock their bikini.
Finally each panelist was asked what was the biggest lesson they have learned through their time building their companies. Whitt went will the immortal words of Kendrick Lamar “sit down, be humble”, meaning to take the time to listen to the people you work with. He also added that if you have passion and confidence, you will get where you want to be. Baker’s biggest lesson was to stand up for herself and her business. Being honest with what she wants to make and not being afraid to push the limits have all lead her down a successful path. Ali’s final message was at the end of the day to just trust your gut. “This is always true to myself. I take a lot of leaps and I have a lot of sleepless nights but I have faith that it will all workout.”

Swimwear Trends You Will See in 2022

Top Tropical Destinations This Winter on a Budget

All available stock is in the cart

Your cart is currently empty.